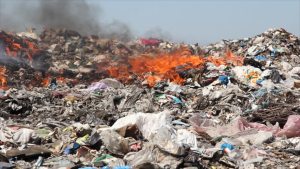 Christ came to earth to break the bonds of sin and death.  All outside of Christ have Hell as their ultimate destination.  What is Hell?  How many think about it seriously, or even consider it is a real place?

The following is excerpted from the chapter entitled “Hell” in R.J. Rushdoony’s “Sermon on the Mount”.

To understand what hell is, therefore, we must see the meaning of Gehenna – [a trash dump].  A trash dump is the place of irrelevant and meaningless items.  What cannot be used because it is useless is consigned to a refuse pile.  Hell is thus the habitation of all who are determined to be useless to God.  Whatever their opinion of themselves, if they are useless to God, they go into His cosmic trash pile.  God’s righteousness or justice is the criterion of usefulness to God, and God’s righteousness is incarnate in His Son, Jesus Christ.

Things in a trash pile have no meaningful relationship one to another.  In a normal house, all things have a place and a relationship in terms of the over-all life of the home.  In a refuse dump, all things are meaningless; they are discarded because they are useless and meaningless.  There is no common meaning, nor any meaning.  There is no communication in hell, because there is no community of meaning.  Every man, as his own god, lives in this own private universe; each speaks his own language of egocentricity and self-deification, and hence every man is all alone in hell.  Hell is an endless monologue in an empty room by legions of empty men.

The inhabitants of hell are in the heaven of their own choosing.  Each is his own god and universe.  For them, there are none now to contradict their will:  they can say eternally, My will be done!  No fire, however, burns more bitterly than the fires of guilt and egocentricity.  Man in the isolation of hell cannot grow:  he consumes himself endlessly.  The redeemed, however, both in this world and in the world to come, have community and growth.